We will be adding information to this page on a regular basis.

Mocollop Castle
The castle (which, while immense, is not visible from the road) has an unusual round Keep with four square flankers (towers). Although the castle is in ruins, the entrance portcullis is perfectly preserved. Early references to the castle appeared in the mid-15th century, but it is believed that the castle itself predates even that.   The remaining walls, at least 12 feet thick and constructed in a perfectly circular manner, suggest the sheer size of the original structure; doors, passage-ways, archways and underground chambers are visible.

The castle was aligned with the Fitzgerald family and is situated on the border between their land and that of the Duke of Desmond. It was attacked by Cromwell in the 1650s, but survived the assault.

The seneschal was the chief estate officer while the chief officer of the castle was the constable. It would appear that in the 16th century the one person held both offices at Mocollop. The family of McGrath held the office of constable through many generations. This family settled in Waterford in the first half of the fifteenth century and made the area around Slieve Gua (between Dungarvan and Clonmel)

The demesne sports a number of trees that are not common in the area, such as linden, red chestnut, copper oak and derivatives of the maple genus.

Clare Abbey in the heart of Thomond, located not too far from Islandmcgrath where our Clan originated. Another good reason to visit Ireland in 2019 for the next International McGrath Clan Gathering, hosted by the McGrath Clan of Thomond from which most of the clan worldwide are descended.

Five McGraths of IslandMcGrath were Abbots of Clare Abbey at about the time of Rory and his son Sean, when the Abbey was at the height of its glory. The McCraith Abbots had Papal ambassadorial functions. Papal letters at the time, show them making papal appointments to Abbeys under them, but more important to Abbeys outside the diocese. Several of these Abbots were later bishops of Killaloe, one was bishop of Ardagh and another bishop of Clonfert. Tadgh McCraith was witness to the renewal of the Charter of Clare Abbey in the mid-1400s. (Dr. Joseph Power, `A history of Clare Abbey and Killone)

Thanks to Wm Fraher, Waterford County Museum for this article, which appeared in the booklet for the unveiling of the plaque which marks the site of the Castle.

Dates for the Diary 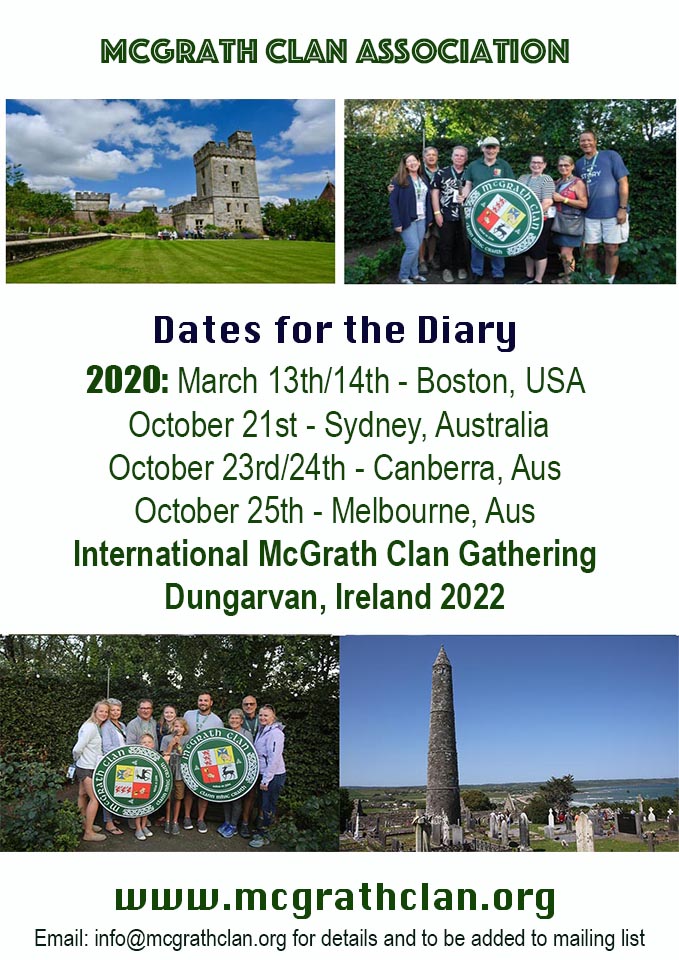